Political markets have short legs. Is this year no different?

To claim that the markets do not care about politics is not enough. Political events repeatedly lead to significant market fluctuations, and the upcoming U.S. presidential election has once again triggered an intense debate in the professional media: Do political stock markets have short legs, or is politics able to influence the capital markets sustainably in one direction or another? The two opinions seem to be in balance at the moment. Why is that?

Viewed objectively, both points of view are well justifiable – as they essentially only differ in terms of the time period under consideration. In the short term, political events can indeed have a substantial impact on stock market performance. In the longer term, however, politics has a rather modest effect on stock prices. The dominant factor of influence is and remains the interest rate level and thus the price of money. It is also undisputed that economic development as well as the fundamental state and framework conditions of an economy are long-term factors of influence.

In other words, politics influences stock market developments, but not sustainably. Does this basic realization also apply this year, or could it be otherwise? A prognosis is more difficult than ever, and decisions must be weighed up carefully. And even if the decision means maintaining the status quo in the portfolio, it is an active decision.

Let us conduct an experiment and assess possible election scenarios and their direct consequences for the stock markets. This against the background that the USA stands for well over half of the global market capitalization measured by the comprehensive MSCI All Country World Investable Market Index.

The political landscape in the USA remains as it is. The polarization of the nation’s population continues, and the America First policy leads to accentuated protectionist tendencies worldwide.

The political landscape in the USA is upside down, the Democrats win the battle for the White House. America gets a new president; political correctness is back in business. A certain reliability of agreements and treaties develops.

The world’s most important economy is incapacitated. The current government is not letting go of its power despite its electoral defeat and is blocking everything necessary for a regulated state operation in an unprecedented legal battle.

Which scenario do you desire?

Maybe you are not sure which scenario is the best for your investments – and you are in good company. In the midst of all the uncertainties, an assessment could be as follows:

All three scenarios could have catastrophic consequences for the financial markets. The risks are disproportionate to the opportunities. The investment decision is: decisively reduce risky investments, buy gold, increase liquidity.

Politics only temporarily determines what happens in the markets. Whatever the scenario, the markets will take the economic recovery as an opportunity to continue to rise – regardless of whether the initial reaction was positive or negative.

You choose the scenario that seems most likely to you and link your expectations of the stock market to this scenario. The problem is that two things could go wrong: Another scenario occurs, or the chosen scenario has an unexpected consequence.

Diversification and a disciplined investment process are the order of the day due to the variety of possible scenarios and their widely diverging consequences.

A systematic approach is to ask the opinion of all market participants and to check their activities based on their positioning. Our proprietary risk indicators track this market activity and compare it with the recent to mid-term past. This allows us to use changes in the behavior of all investors as a gauge of their expectations. This is not an uncertain or arbitrary selection of a scenario, nor is it a fragile assessment of the consequences of the chosen scenario on stock market performance. It is the assessment of the investor population, and this assessment is the main driver of future market development. It rarely leads to surprises, as investors are not easily swayed in their fundamental convictions – and certainly not by political events or a presidential election.

At the moment, investors seem to believe that the dramatic economic slump caused by the Covid-19 crisis will give way to a steady economic recovery. We are observing a moderate systemic risk, which signals a surprising confidence among investors. The ongoing expansionary monetary policy and the additional support measures taken by central banks to contain the crisis mean that the already abundant liquidity is being built up even further. In such a scenario, holding on to tangible assets seems to be the only right strategy, and this view is shared by most investors. The performance of our Global Systemic Risk Index confirms this optimistic picture. 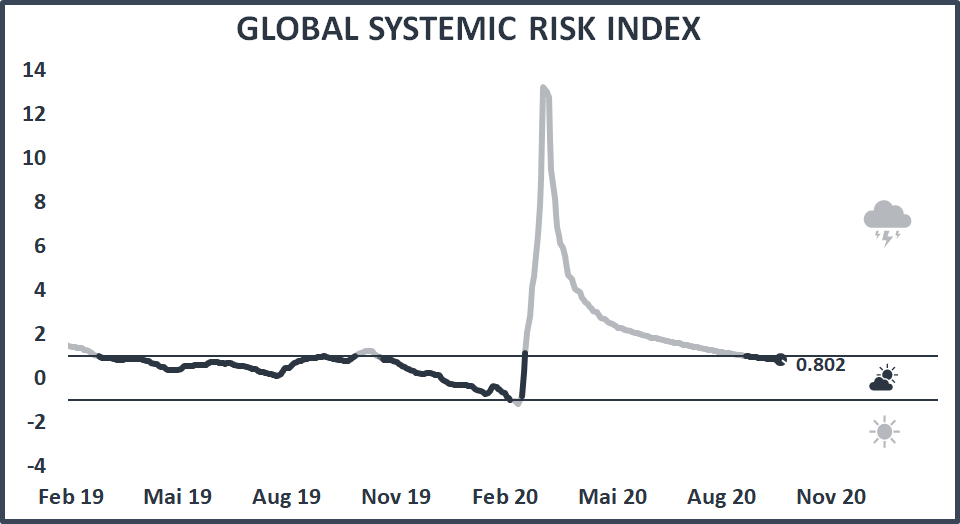 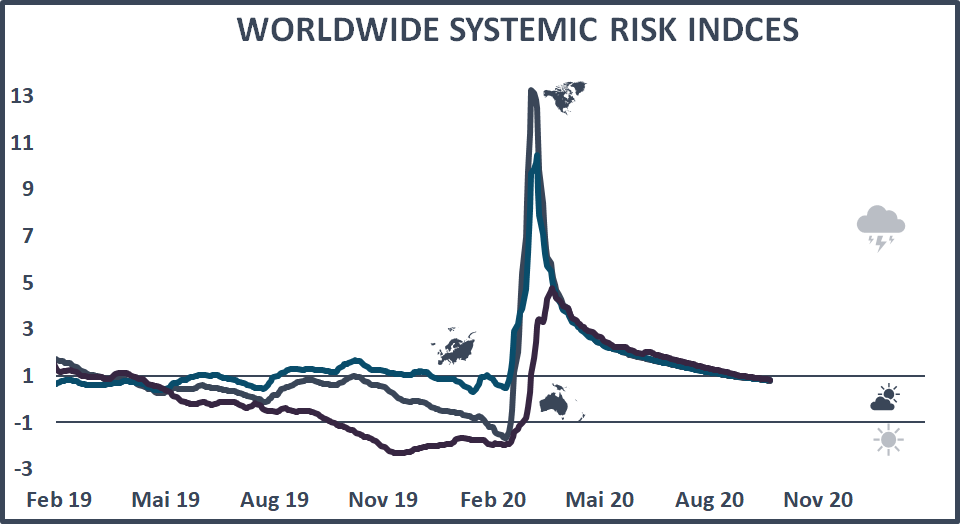 A careful stock selection, which takes into account all objective and therefore measurable circumstances, can generate substantial added value. This is our conviction, which has proven itself impressively in recent months. The QSS mandates have achieved outstanding results, which we would like to demonstrate using the example of our European portfolio PAReurope:

Europe is undoubtedly a market that has lagged behind for many years. Compared to other continents, its development could not have been more disappointing. The Nasdaq Composite Index has performed an impressive 547 percent better than the old continent since the beginning of the bull market in 2009. Although the difference between the EuroStoxx and the Nikkei 225 or the Dow Jones is less extreme, the European market still performed much worse. It seems as if Europe is completely losing touch and falling back into insignificance. Is this really the case, or is the stock market exaggerating once again? Over the past ten years, Europe has remained almost unchanged:

Weaknesses that cannot simply be eliminated are evident at all levels. Moreover, the capital markets are all about relative attractiveness. The more clearly different markets diverge, the more attractive the future of the primus is considered to be. Not so long ago (during the global financial crisis) the Nasdaq was trading below 1500 points. No one wanted to know about technology stocks because the dotcom bubble had recently burst and volatile stocks with no earnings seemed less attractive. In contrast, the stock market world is currently anticipating that these then spurned companies will continue their unique business growth of the last twelve years unhindered – without interference, without disruptive factors, without setbacks, without competition. History teaches us that every boom experiences a decline. But it also teaches us that the worst area of a city can suddenly evolve into a sought-after district.

Europe, which today is spurned, seems to be considered by investors as the worst “city district” in the world. Do they reckon without the host? Have they forgotten that Europe has a unique diversity and long-standing values, with a mostly mature sovereign? Where do we experience more difficult democratic processes than in Europe, and are they not also a sign of strength? The alternative is to question treaties, to impose one’s own interests as the only maxim and to humiliate the supposed opponent at the next opportunity. Europe has by no means done everything right, but neither has it done much wrong. In terms of its relative attractiveness, the European stock market has considerable potential.

The first quarter of 2020 brought losses that were at times almost unprecedented; the second quarter delivered the striking countermovement with strong increases in value. The third quarter took over the positive momentum of the three previous months, albeit at a slower pace and with still significantly increased volatility. The MSCI World stock index closed the quarter up 8.05%, while emerging market equities, as measured by the MSCI Emerging Markets, advanced 9.70%. The SPI gained 2.32% between July and September. European equities lagged behind the US stock markets, with the Nasdaq leading the table once again. Investors reporting in Swiss francs suffered noticeable currency losses for securities denominated in dollars.

Commodities were the asset class that suffered the most during the first quarter. Commodity prices made up some of their losses in the second and third quarters, but are still in the deep red with a decline of around 20% since the beginning of the year. Following the incredible distortions on the oil market in mid-April, the price of a WTI crude barrel stabilized at around 40 dollars in the third quarter. Gold passed the magic mark of 2000 dollars at the beginning of August and even reached an all-time high; with a 25% increase since the beginning of January, gold more than lived up to its status as a safe haven. The broad commodity index CRB climbed 7.67% in the third quarter (4.39% in Swiss franc terms).

Since the beginning of the year, the international real estate markets have also been deep in the red. Swiss real estate, measured by the SXI Real Estate Funds Index, has held and continues to hold up comparatively well. In the third quarter, they advanced by a respectable 4%, which corresponds to an increase in value of 2.30% since the beginning of the year. Foreign real estate investments increased by 2.02% (-1.08% in Swiss franc terms), following a 30% price slump in the first quarter and a 10% increase in the second quarter. The situation for commercial real estate is likely to remain difficult and suffer from the consequences and structural changes brought about by the Covid-19 pandemic.

In response to the Covid-19 crisis, central banks around the world flooded markets with liquidity in the spring, the Fed cut interest rates to zero, and the ECB came up with new, unprecedented measures. Since this policy of the central banks first stabilized the financial markets and then gave them a boost again, the dollar had to record significant losses as a result of the market calming. The greenback lost 3.04% against the Swiss franc in the third quarter, compared with -5.12% since the beginning of the year. At the end of September, the euro was 1.44% higher against the Swiss franc than at the end of June and 0.54% lower than at the beginning of the year. The union currency appreciated by 4.41% against the dollar in the third quarter and by 4.47% since the beginning of January.