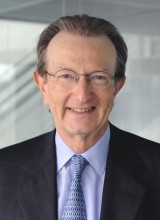 WALTER KNABENHANS, born in 1950 in Zurich: Walter Knabenhans’ career has taken him from the Credit Suisse Group, where he held various positions, to Chief Risk Officer and Member of the Extended Group Executive Board of Julius Baer Group, where he served as President of the Executive Board and CEO. Today, he is an independent financial and investment consultant and has held a number of directorships, including chairman of Bellevue Group AG, Küsnacht (ZH), and director of Finnova AG, Lenzburg, and Bank Morgan Stanley AG, Zurich.

Walter Knabenhans completed his academic education at ETH Zurich and the University of Zurich, earning a Master’s degree in Civil Engineering.