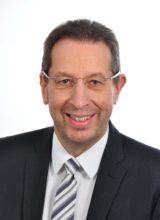 HANS PETER SIMEON, born in 1955, trained as a controller at the Swiss Institute of Business Economics (SIB) in Zurich. During the course of his career, he worked in various roles at Schindler Waggon AG from 1976 to 1998, finishing as Head of Controlling and Deputy Head of Finance.

From 1998 to 1999, he was Head of Controlling at Eurocargo and Deputy Head of Finance at Danzas AG. He then moved to the Basellandschaftliche Pensionskasse (BLPK) in Liestal. From 1999 to 2017, he was a member of BLPK’s Executive Board, and took on the role of Managing Director from 2003. During this time, he was responsible for the reform implemented in 2015 related to the change from a defined benefit to a defined contribution plan. He retired from the position of BLPK’s Managing Director at the end of 2017. Hans Peter Simeon is currently a member of Adimmo AG’s Board of Directors and Vice Chair of InRoll AG’s Board of Directors.