The Quantitative Stock Selection approach was started in 2004 and has been continually developed since. It has been used in its current form since 2010. The following empirical values were collected over the course of more than twelve years: 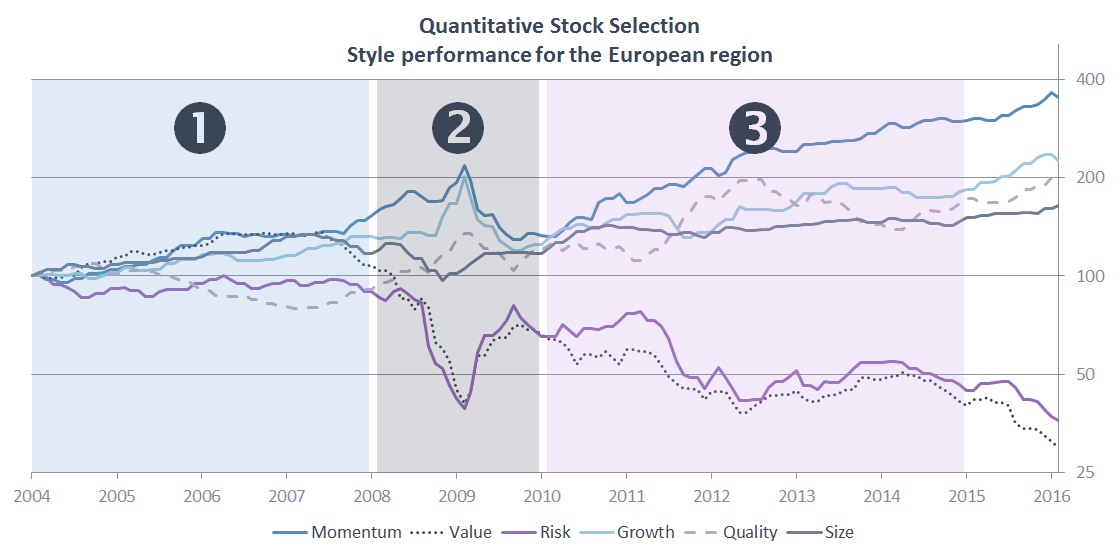 Between 2004 and 2006, the rate of global economic growth increased significantly. We positioned ourselves in those style groups that are positively correlated to an economic upswing. We achieved a marked outperformance by selecting equities using earnings revisions, price momentum, risk and valuation strategies as well as overweighting of small and mid caps.

The global economy started to slow down again in 2007, which led to broad market rotation into less cyclical and defensive investment strategies for equities. The market players increasingly positioned themselves in more expensive stocks with low risk parameters, high quality, stable growth and higher market capitalization. We anticipated investors’ risk-averse behavior in time, resulting in an excellent performance compared to the benchmark.

2008-2009: The global recession and the subsequent economic recovery caused a major rotation in the equity markets

The recession in 2008 required even more defensive positioning than the year before. Investors preferred very expensive, highly capitalized stocks with the best balance sheet quality and the lowest risk. The global economy bottomed out at the end of 2008, causing investors to reposition themselves in cyclical value stocks with high risk parameters, low balance sheet quality and a lower stock market capitalization. This required rapid and radical portfolio rebalancing, which we could not carry out in time. In 2009, which was a very good year for equities, the QSS portfolios’ performance was down somewhat compared to the benchmark. The findings from 2008 and 2009 prompted us to make the QSS approach more dynamic with the help of an economic cycle model in order to better anticipate investors’ cyclically sensitive behavior with regard to style positioning. Based on further findings from this time, the portfolios were subsequently positioned to be neutral for countries, sectors and currencies in order to avoid undesirable residual risks from stock selection. Continuing improvements in the degree of efficiency in the different regions led to a gradual increase in the passive management of more efficient markets.

The financial crisis led to a continued slowdown in global growth. This prompted investors to buy more expensive, less cyclically-sensitive stocks of high-quality companies with low risk and attractive earnings and price momentum. The global economy managed to recover slightly in 2013, prompting market players to take short-term and more cyclical positions. The economic cycle model that was subsequently implemented anticipated the global recovery well, which was the reason for the QSS portfolios’ significant outperformance. The strict avoidance of residual risks also led to an increase in the information ratio (portfolio excess return relative to tracking error).

In 2016, the revival of global economic growth led to massive rotation in the financial markets. After a year of weak growth, key leading indicators were already suggesting mid-year that the bottom had been reached – and that the economy had switched into recovery mode. However, many investors had almost given up on the idea of a revival of economic growth.
In June, we positioned ourselves opportunely in styles that are positively correlated to an economic upswing – such as low valuation assets, for example. This rebalancing delivered good results, as cyclical equities performed significantly better in the second half of the year than defensive securities trading at a valuation premium.

Please take a look at our current forecast on our blog.