The risks are increasing

In the third quarter of 2019, the international stock markets moved sideways in a slightly positive range and bond yields fell significantly. Contrary to many fears, however, neither the escalation of the Brexit conflict nor the attack on Saudi Arabia’s oil production were able to shake the financial markets sustainably. With regard to the oil price, the fundamentally deteriorating demand is currently outweighing the possible consequences of a supply shock. In recent weeks, however, the trade dispute between the US and China has entered a new round and the current Brexit talks have been successful. Slight adjustments to the treaty have been adopted by the 27 EU member states. However, the likelihood that it will be rejected again in the British Parliament is realistic and would lead to new elections and a last short postponement of the withdrawal. The downside risks to the global economy and markets have increased. The dollar and gold have benefited from increased geopolitical tensions.

This turbulence is also reflected in our risk indicators. Systemic risk is rising rapidly and the risk-return ratio is deteriorating. It is therefore appropriate to reduce the real asset ratio and put the portfolios in protective mode. Two factors deserve special attention: the development of emerging markets and the trade war between the USA and China.

Since the beginning of 2018, emerging market equities have performed significantly worse than the broad MSCI World index. This year, however, after a particularly difficult period from April to mid-May, they have stabilised, divergence to the developed markets has declined – the time to talk about the potential of these markets is favourable. Emerging markets have been severely shaken by the trade war, but much of the impact is likely to have been priced into today’s valuations. In line with the weaker outlook for the global economy, growth rates in emerging markets have also slowed, especially in China, but remain significantly higher than in the developed world. While the growth rates of the industrialized countries hold further potential for disappointment, the growth momentum of the emerging markets is underestimated in the market noise.

The dynamic emerging markets are supported by good demographics, a young population and high growth rates. They have little structural legacy, often healthy finances and a flexible and effective labour market. Their central banks have even more leeway than the US Federal Reserve and the European Central Bank. In addition, many emerging market companies are benefiting particularly from the digital transformation and new technologies. Thanks to leap frogging, they are now direct competitors of traditional players – and have often overtaken them. Risk factors include a much stronger dollar and the associated outflows of capital, missing or untested state structures, corruption and, in some countries, political instability that can result in poverty and major social differences. Overall, we believe that the emerging markets will outperform the industrialized countries in both, a slowdown in the global economy as well as in a renewed recovery.

A trade war knows only losers, but it can be debated whether the USA or China holds the whip hand. It is clear that the test of strength is likely to be in favour of the stronger counterparty. But who is the stronger? Opinion has almost mutated into a question of faith, even though a sober view delivers a clear result – almost as clear a result as the absurd discussion led by President Trump that his inauguration would have seen at least as many people as that of Barack Obama.

The development of the two countries in the last twenty years speaks for itself. It’s not just about trade balance and competitiveness, it’s about dependencies at different levels. America needs China to finance its budget deficit and depends on products from China that are extremely important for the economy, such as rare earths and high-tech components. American agriculture is dependent on the huge Chinese market for soybeans, among other things. The USA is the weaker counterparty, even if this does not suit us. The impeachment proceedings against the American president are progressing rapidly, with an uncertain outcome. His countless hair-raising and counterproductive decisions are also a clear sign of weakness. Respect is only given to the military power of the USA, which inspires fear in some observers.

In our last newsletter in July we wrote:

The past few months give us hope that the recent positive performance of the equity markets will continue despite – or perhaps due to – the existing worries and skepticism. Although the geopolitical risks have not diminished, we still expect the markets to be fully capable of absorbing further shocks or negative news.

This forecast has proved to the extent that equity markets have absorbed various shocks well. Although geopolitical risks have increased significantly, as expected international markets did not collapse over the quarter, but almost came to a standstill. With the exception of foreign real estate, which was boosted by the Fed’s policy, all asset classes showed worse results than in the second quarter:

The wind and the dynamics on the financial markets have turned in the third quarter. Is it time for a new heavyweight in the portfolios? The US equity market, which has clearly outperformed the other regions in recent years, is likely to have passed the zenith of its supremacy. American equities account for more than half of the MSCI World and fundamental considerations regarding its weighting are warranted. The development of American equities over the last ten years cannot continue like this. The weighting of the US high-flyer market should be reduced in favour of lagging markets such as Switzerland, Europe and emerging markets. Due to their lower valuations, they hold more potential than American stocks. The motto is: “The heat comes when the sun has already risen”.

Equity investors should be particularly cautious about growth stocks. This applies above all to technology stocks. These stocks are overvalued and again hold the greatest potential for setbacks. A political dimension is emerging in this industry that is significantly increasing the risk profile of these companies. In the medium term, the highest degree of caution is appropriate in this investment segment, but in the longer-term equities are generally the beneficiaries of the persistently low interest rate environment.

The bond market – by far the largest securities market in the world – is currently in the largest bubble ever observed. It is difficult to imagine what exactly will happen when the bubble bursts. There are times when liquidity is not king but emperor.

The central banks flood the markets with cheap money. Being the saviours of equity investors, the easy money era slowly reaches the limits of what is possible. Coupled with increasing political and systemic risks, this leads to an increase in demand for “safe” investments. Precious metals, above all gold, offer themselves as an investment alternative. They have important advantages over equities and bonds: they do not demand negative interest rates, retain real value in times of crisis and are a global currency that is largely independent of governments and central banks.

Uncertainty is poison for the markets, so the systemic risk rises rapidly. Our risk indicators show a deteriorating market environment and we are observing a significant concentration of risk. In the midst of the considerable political and economic risks, we do not believe that the conditions are in place for further price increases, and the risk of tail risks is on the rise. Taking risks should not pay off in the near future. At the beginning of October, we therefore put the portfolios in a protective mode and reduced their real asset quote. This defensive positioning was achieved by reducing our positions in “Equities World” (currency-hedged) and “Equities Switzerland”, as well as in commodities. We expanded our exposure to bonds with a short duration. We also increased our liquidity position 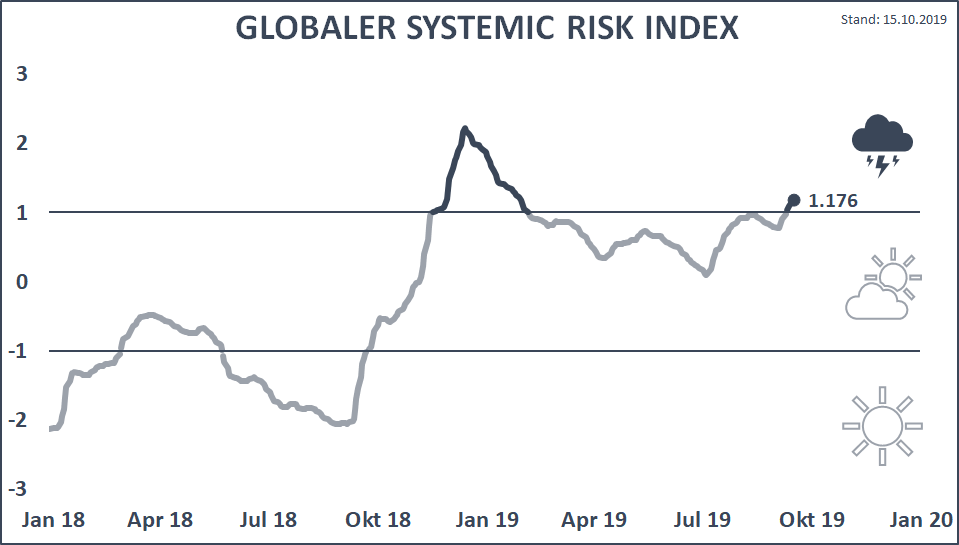 As long as the aforementioned problem areas do not calm down, we will maintain our defensive approach in our portfolios.

In our second quarter newsletter we wrote:

After a difficult phase, the results of the QSS approach have improved and we have again been able to absorb style premiums. In terms of styles, we prefer quality, reasonable valuations, lower risk and momentum. This weighting corresponds to the current economic cycle, which is in a cooling phase and requires a slightly more defensive positioning.

This forecast has proved to be correct and our QSS portfolios continued to deliver a positive alpha in the third quarter, especially in small caps “Equities World”. In terms of styles, we remain well positioned and continue to favour low risk, momentum and growth. In Equities Europe and Equities Switzerland, we were slightly too defensive and slightly underperformed the benchmark in the third quarter. With this positioning, however, we are well prepared for the Brexit uncertainties. The BoA’s leading economic model signals a recession in Europe, and the current values of our risk indicators recommend a clearly defensive positioning.

In our QSS mandates, we are weighted neutrally in terms of sectors, countries and currencies, which reduces the tracking error and has a calming effect. The selected securities with advantageous benchmarks reduce the portfolio’s risk compared with the benchmark.

After the astonishing first half of 2019, the third quarter showed clear weaknesses, especially in August. The SPI recorded a comparatively pleasing performance of 2.14%, while the MSCI World stock index showed a volatile sideways trend and closed the quarter with a slight gain of 0.66%. Emerging market equities, as measured by the MSCI Emerging Markets index, fell by 4.11%, suffering from the intensification of the erratic trade war between the US and China. Swiss franc investors suffered minor currency losses on European stocks, while dollar-denominated securities delivered gains.

Since the beginning of the year, investment grade bonds have shown attractive results. JP Morgan’s global market index advanced 1.14% in the third quarter, representing growth of 3.44% in franc terms. Franc-denominated bonds with ratings between BBB and AAA continued their slight upward trend again, ending the quarter with a gain of 1.60%. The yield differential between short and long-term franc-denominated bonds remained virtually unchanged.

Prices of commodities indices are largely driven by the price of oil. After the impressive advances of the first quarter, the broad-based CRB commodity index fell by around 1% in the second quarter, closing the third quarter down 3.41% (-1.22% in Francs). The price of crude oil experienced a volatile downward correction while gold rose sharply against the backdrop of an uncertain economic environment and political turbulence. Gold was 15% higher at the end of September than in early January. Calculated in Francs, commodities saw an increase of 5.40% since the beginning of 2019.

The Fed left key interest rates unchanged in the first half of 2019, which gave the real estate markets an enormous boost. In the third quarter, the Federal Reserve cuts interest rates as demanded by President Trump. The European Central Bank also continued to ease its monetary policy and lowered its deposit rate again by 10 basis points in mid-September, from minus 0.4% to minus 0.5%. At the same time, it announced a fresh stimulus package. In Switzerland, no interest rate increases are foreseeable. Swiss real estate funds grew 1.03% in the third quarter, while foreign real estate investments increased by 3.45% (5.80% in franc terms). Since the beginning of the year, this has meant an astonishing performance of 14.13% for Swiss real estate and 20.76% (in franc terms) for foreign real estate.

The Federal Reserve’s decision not to increase interest rates in the first half of 2019 put a brief halt to the diverging interest rate movements between the US and the rest of the world. The Fed’s rate cut in September confirmed this trend. The dollar gained 2.27% against the Swiss Franc in the third quarter, after a decline of 2.10% in the second quarter. The single currency continued to weaken, losing 2.00% against the Swiss franc and 4.27% against the greenback between July and September.