Records across the board

The year 2019 will go down in history – not only due to the extent of the reported rise in value, but also because of the range of asset classes that have experienced these increases in value. Nearly all investments have achieved a clearly positive or even record-high performance.

These developments can be described as asset inflation or as a sign of mistrust in the monetary assets issued by governments or their central banks in the form of currencies. It is impossible to predict how long this mistrust will be accompanied by the unshakable conviction that the unparalleled experiment of indebtedness and liquidity creation will succeed. Yet it is appropriate to be cautious. Should a larger number of investors focus on the following questions, a correction to the markets is inevitable: How will rising government debt be repaid? How can the diverse and innovative liquidity that has been created since the financial crisis be skimmed off again?

Our customers and we would like to partake in a favourable development of tangible assets – but this requires efficient precautionary measures. Our risk indicators warned us twice in the last year, first in January and once again in October. Whilst the first warning signal, or rather the resulting more defensive positioning, had a negative impact on our performance, the second warning hardly had any impact on our annual results.

In retrospect we do however consider both cautions to be correct, since we don’t have a crystal ball either. At PARSUMO we live according to the motto of caution. We therefore use defensive risk management, which is fundamental in certain market phases in order to have long term success. We and our clients are aware that this is tied to some performance loss. Avoiding “tail risks” in certain market phases is what our clients appreciate about our approach. They are also prepared to pay a reasonable premium for this.

On average, investors hold only about 25% of their investments in equities. We have always recommended that this proportion of equities be significantly increased and that “defensive risk management” be applied. Although this strategy does not allow investors to participate 100% in the growing potential, it can prevent significant losses. If investing is now equated with saving, this must be accompanied by reliable signals and appropriate measures to cushion market setbacks. You receive these signals from us, and we implement them in our portfolios to protect your assets.

Why this immense difference? It is due to the most underestimated investment effect – the compound interest effect. It is responsible for this 20-fold increase in the value of equities compared to bonds: a return twice as high per annum for around 100 years does not lead to a doubling of assets, but to a twenty-fold increase.

Given these figures, should not every investor hold a pure equity portfolio? With good diversification, they would have generated a return of more than 25% in 2019.

People are emotional and tend to evaluate negative events more strongly than positive ones. This phenomenon has far-reaching consequences when it comes to investing one’s own assets, because, as mentioned above, investors only hold an average of around 25% of their investments in equities.

The following market setbacks are responsible for this caution (S&P 500):

It is understandable that many investors do not want to expose themselves to such temporary equity risks and limit their equity exposure to a quarter of their portfolio, despite the above-mentioned potential. But in today’s world, where short-term events rather than long-term developments are on everyone’s lips, it seems particularly important to focus on the latter.

Swiss equities speak the same language even in the medium term over five – and even more so over ten – years. Over the last 100 years, there have only been six five-year periods with a negative result. When looking at ten-year periods, the risk of generating a negative real return on equities is reduced to just three times. In rolling 20-year periods, losses could even be completely ruled out.

The above-mentioned and frightening short-term fluctuations are the exact reason why PARSUMO focuses on these “tail risks” and give maximum effort to get a better grip on them. Our declared goal is to counter the fluctuations on the stock markets in such a way that the mentioned market setbacks are bearable even for investors with a reasonably high equity exposure. In doing so, our aim is not needing to reduce the aforementioned value enhancement factor 1000 to a factor of 50 for a substantial portion of our portfolio.

Our proprietary Systemic Risk Index (SRI) measures the fragility of the markets. SRI demonstrated its reliability in December 2018, when the market fell by around 19%. On 13 December SRI signaled a fragile market situation. With regard to the S&P 500, the exit on that day led to a positive annual result of 1.67% (in Swiss francs 3.62%) and the negative performance of -3.87% (in Swiss francs -2.76%) that the index achieved in 2018 was avoided. Applied to the Swiss market, the response to the signal has reduced the annual loss of the SPI from -8.57% to -4.24%.

What can we expect from the new year?

After extraordinary stock market years such as 2019 (measured by the MSCI World), another good performance year followed eleven out of fourteen times since 1970. Whilst history does not always repeat itself, it definitely says something about the probability of developments. If the probability is relatively high, as in this case, one should go with history. We therefore expect another good year for equities in 2020.

To define our risk regimes in the context of Risk Regime Investing (RRI), we utilize the global Systemic Risk Index (Global SRI). The global SRI is composed of the capital-weighted Systemic Risk Indexes for the USA, Europe and Asia-Pacific. At present, the Global SRI signals stable market conditions. SRI Europe and the USA have hardly reacted to the recent events in Iraq and Iran. The SRI Asia-Pacific showed a slight increase in risks, but remains at a very low level.

We are starting 2020 with confidence, yet we do not set our expectations too highly. Since the last portfolio adjustment on October 30, 2019, our portfolios have had a neutral orientation. Based on historical experience and ongoing asset inflation, we expect the positive market trend to continue. Even if it is unrealistic to repeat the results of 2019, it is worth holding on to increased asset value ratios.

Our indicators will show us a change in risk at an early stage. We are convinced that the attentive monitoring of Global SRI and defensive risk management will be invaluable for the future. They will become even more imperative as the bull market continues to last. 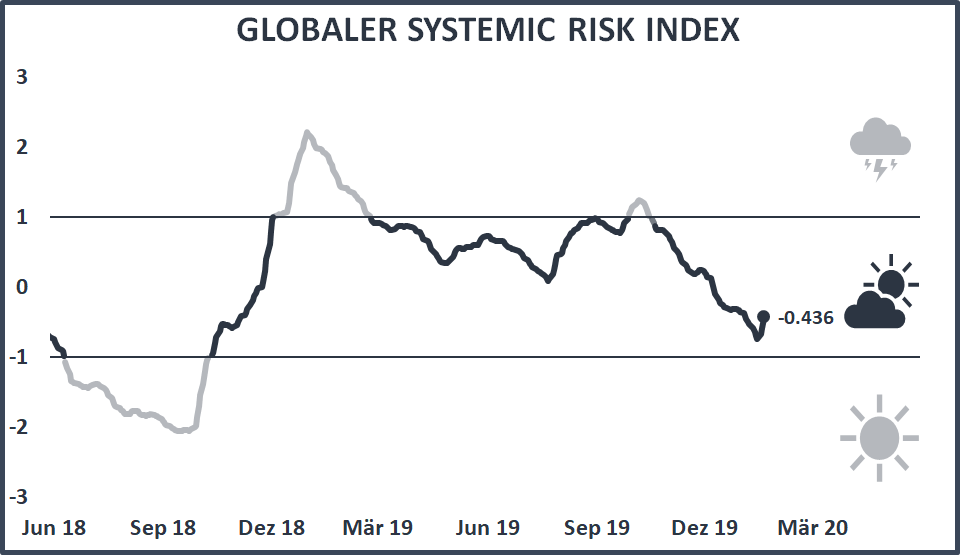 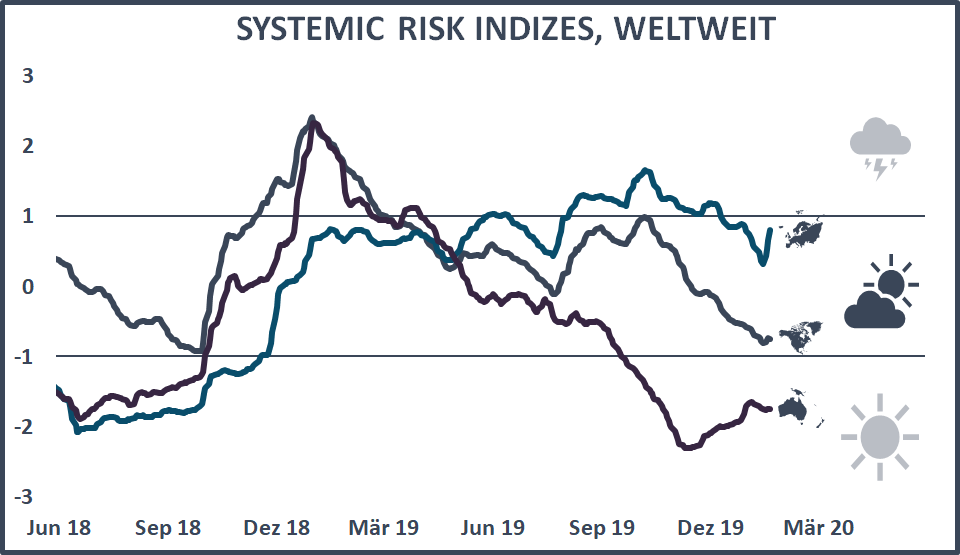 The absolute returns on our QSS mandates were consistently positive in 2019. However, due to our defensive style positioning – we favoured good quality, value and good earnings estimates – we are slightly behind our benchmark.

By mid-year, we had almost made up for the ground lost in our Europe, Switzerland and Global Small&Mid Caps strategies. We recall the unique events of the first quarter of 2019, where we saw low-risk stocks sold en masse and expensive stocks already in demand at even higher prices. A situation that is neutralizing itself and will lead to a continuation of the positive development of our relative results.

Furthermore, the development of the emerging markets is quite interesting. At the beginning of December, they were still lagging far behind the equity markets of the industrialized countries by 12% (measured by MSCI Emerging Markets vs. MSCI World). Since then they have outperformed the MSCI World. For the full year 2019, the MSCI Emerging Markets score of +18% is still below the 28% of the MSCI World. However, we remain convinced that our recommendation in favour of the emerging markets will be worthwhile in the coming months. A reassessment by investors is currently taking place, which has led to significant advances in the emerging markets that have gone unnoticed by many investors. This will possibly continue at the same pace in the coming months or even quarters.

The expected recovery of the MSCI Emerging Markets compared to the MSCI World started rapidly – we deem this development to be sustainable and supportive of investments in the PARemerging Markets Equities Fund (ISIN: LU1634415357).

The 2019 stock year was outstanding. After a very good first half, August showed some weaknesses, but by the fourth quarter they had disappeared. The SPI posted a performance of 4.94% from September to December, and over the whole year it gained an incredible 30.59%. The MSCI World index concluded the year with a plus of 27.67%. Emerging market equities as measured by the MSCI Emerging Markets advanced in 18.42% over the year. Although investors calculating in Swiss francs suffered smaller currency losses in both European and dollar-denominated securities, they achieved an excellent performance.

Investment-grade bonds were the only asset class to post a slightly negative performance in the fourth quarter of 2019. Nonetheless, bonds also ended the year with an encouraging result: JP Morgan’s global index rose 6.02% from January to December, which represents a performance of 4.14% in Swiss franc terms. Swiss franc bonds with a credit rating between BBB and AAA fell by 1.74% in the fourth quarter, achieving an overall annual performance of 3.05%. The yield differential between short- and long-term Swiss franc bonds remained virtually unchanged throughout the year.

The commodity indices, strongly influenced by the oil price, have had an eventful year. After some encouraging gains in the first quarter, the broad-based commodity index CRB fell slightly in the second and third quarters. The fourth quarter was again positive, with a performance of 7.25%, and the index was 11.75% (in Swiss francs 9.77%) higher at the end of December than at the beginning of the year. The price of a barrel of European Brent crude oil fluctuated between 56 and 75 dollars, closing the year up with a plus of almost 20%. Gold benefited from its status as a safe haven in uncertain times and, against a backdrop of an uncertain economic environment and political turmoil, rose by more than 20%, especially in the summer months.

The US Federal Reserve kept key interest rates unchanged in the first half of 2019, and in the second half of the year it made three rate cuts. Barely a year after announcing its intention to stabilize the money supply, the European Central Bank has returned to an expansionary course. In mid-September it cut its deposit rate from minus 0.4 to minus 0.5% and announced new bond purchases and other stimulus measures. The Swiss National Bank (SNB) remains in negative interest rates. This gave the real estate market an enormous boost. Swiss real estate funds showed a performance of 20.67% in 2019, with foreign real estate investments advancing 23.58% (in Swiss francs 21.39%).

After a diverging trend in interest rates between the USA and the rest of the world in 2018 – the Fed had decoupled itself with gradual interest rate hikes – 2019 was once again a year of expansionary global monetary policy. Geopolitical events and uncertainties shaped the currency markets; the franc came out as the winner, quite unfortunately for the export industry and the SNB. In the course of the year as a whole, the dollar fell by 1.77% in comparison to the franc. The euro continued its longstanding weakness, trading 3.61% lower against the franc at the end of December than it had at the beginning of the year. The single currency lost 1.81% with respect to the dollar.